The big news from Amplid HQ this month is that Amplid skis killed the 2011/12 Freeskier.com ski test, taking home three prestigious Editors Pick awards. The Editors Picks are awarded to skis that perform hands-down better than the rest of the pack at digging trenches into groomers, floating effortlessly over pow and belittling the park. 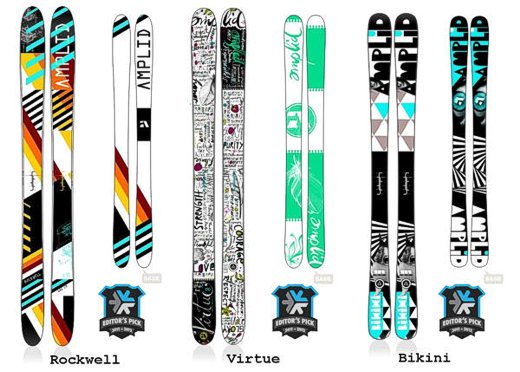 This year’s winners LTR the Rockwell, Virtue and Bikini

Testers were raving about our new soft flexing do-it-all ski the Bikini and awarded it with a near perfect 18 out of a possible 20 points.

The Bikini is light and breezy, like you’d imagine it would feel to wear a bikini spring skiing. Surprisingly though, testers said it was sturdy despite a soft flex. The tail has some pop for exiting turns, which testers called “responsive.” Early rise tips keep the Bikini afloat and reduce hooking should you come across soft snow. Take note: Even our more petite testers reported that the 159 was “too short,” so consider stepping up to the 167 length. Click HERE

With our women’s fat Camrock powder ski the Virtue bringing home the bacon with maximum points for playfulness and 0.5 points shy of top marks for carving and float, we’re stoked that the Virtue also scored an 18/20.

To ensure that your pow days are lived to the fullest, Amplid gives you the Virtue. The early rise in the tip and tail provides solid float when you’re shredding in the white room, and camber underfoot guarantees edge hold when you’re rocking. One tester noted, “It’s a super fun ski, easy to ski on. Initiated turns well and carved incredibly well.” Though fully capable all over the mountain, the Virtue is best suited to ladies who are the first ones on the lift in search of the deep untracked. Click HERE

Last season the Rockwell was a big hit and its prowess is no less potent this season. Combining a mid-wide waist and camber underfoot with rocker at the tips blends impressive carving performance with a confusing amount of float… at least that’s what we thought and the testers agreed!

At 96mm underfoot, the Rockwell is wide enough to perform in pow and crud but also nimble enough to be agile on groomers. Slight rocker allows you to power through anything in your path. “It’s a fun ski and is deceptively floaty in the pow,” remarked one tester. “It carves at speed really well but is a bit slow to get going at low speed. It definitely wants to go fast.” Click HERE