Every Friday we ask a member of the Amplid Cartel team to tell us about five of their favorites. From five must have tricks you need in your repertoire to the five albums that are rocking their headphones every time they destroy the park. Weekly we’re bringing you closer to the Amplid Cartel. 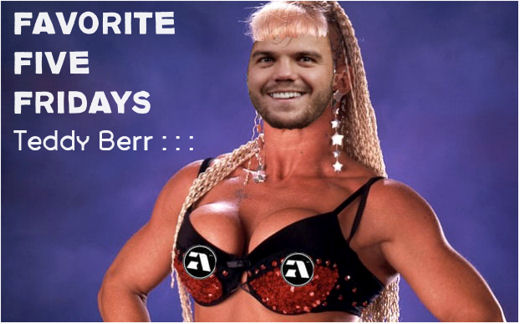 This week we cornered Teddy Berr; part-time freeski legend, part-time online editor for one of Europe’s most prestigious freeski publications and the only man on the planet to lawn dart a 30m table top and completely clear the landing… naked, and l live to tell the tale. Of course we weren’t expecting a normal Favorite Five from Teddy, he pitched a handful of (in his own words) “genius” ideas, including:

We told Teddy to go back to the drawing board and send us a “genius” idea. After several weeks and a good few rounds of email tennis we settled with “Teddy´s favorite five old-school wrestling moves”. Be afraid, be very afraid.

The Ankle Lock - Perfect if your rival tries to kick you in the face!

The Crossface - The good thing about this move is, you at least don´t need to hear the “girlish” whine.

The Sharpshooter - For the perfect Tweak, hahah!

The Bear Hug – Breathtaking! Works perfectly with combatant of male as well as female gender. In the second case I also recommend the horizontal execution a.k.a. the TeddyBerrHug.