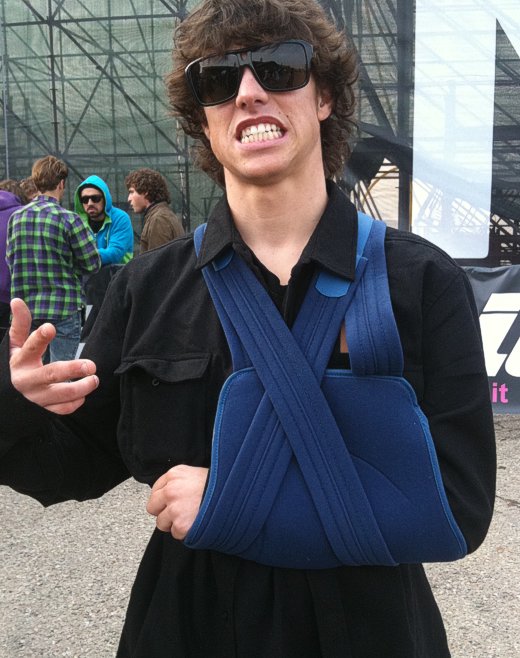 This weekend team rider Luka Melloni travelled down to Modena from his home in sunny Barcelona to meet-up with a handful of riders from the Amplid team and compete at the Nissan Skipass event.

The Skipass event’s ramp setup is completely unique, consisting of a mellow kicker transition with a hip style landing which can be hit and landed to the right or cleared completely and landed down the back which was the option that the majority of the field took, and the only option that allowed for enough airtime to stick bigger tricks. Saturday, the first day of the competition was a qualifying event and a handful of riders were to be selected from this round to compete with the seeded riders in the semi-finals on the following day. Luka had actually been seeded with an automatic pass through to the semi-finals but wanted to get the feel for the kicker so competed anyway, throwing down his trademark Truck Driver 900s with super clean style. On the last hit of the day Luka having stomped his trick got caught out by the transition between the landing and the run-out which threw him onto his shoulder dislocating it pretty badly. The team of paramedics were unable to get his arm back into the socket so a gutted Luka in absolute agony had to make a trip to the local Hospital where the doctors could use a muscle relaxant to ease up his shoulder and pop his arm back into the socket.

In typical Luka style he returned to the Hotel that evening mad with himself for not stomping the trick, but after a couple of slices of pizza with the rest of the amplid team was back to his cheery self. The doctors have told Luka to keep his arm in a sling for the next four weeks and then it will be a further two weeks before he can get back out on his skis which conveniently brings him to the start of the Pyrenean winter season. Everybody at amplid is wishing Luka a speedy recovery and praying that his one handed driving skills are as good as his Truck Driver skills because it’s a long drive from Italy to Spain!