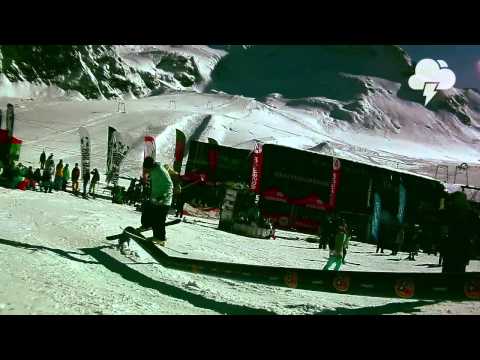 Amplid Cartel rider Luka Melloni checked in with HQ yesterday and told us about his 4 th position at the Kaunertal Opening slopestyle competition, which took place 10 days ago. According to Luka who had made the pilgrimage to the first big event of the Freeski calendar from his home in Spain, “I had one of my best days ever. I stomped everything and I completed my three runs completely clean and smooth.”

When the results were released Luka was a little disappointed. “I thought I would podium and the judges put me 3rd. I didn’t really agree with the decision because the head judge had said in the riders meeting that style and sticking landings was most important, but anyway I was still on the podium.” However, Luka’s day took another twist, “Finally they did the awards and they decided to move me into fourth place.”

A bit of a downer to end a great weekend but when we spoke to Luka he was pretty laid-back about it “The weekend was awesome. I skied pretty good and the most important thing is that I enjoyed myself shredding with my Spanish homies in Austria!” Sometimes judging goes your way and sometimes it just doesn’t, but we’re sure Luka will be enjoying plenty of podiums this winter.