February in Alaska marks the point in the winter where the steeps turn on!

After several weeks of high avalanche danger and poor visibility, a strong high pressure system set itself down over the Chugach Mountains. The avalanche report from the Chugach National Forest Avalanche Information Center had downgraded the report to moderate after several days of cool and calm conditions. When the weather and snow align, it’s time to move!

Thursday started in Hatcher Pass. The snow here has been horribly thin and unstable until now. With the recent storm dumping over a foot of snow, I had a feeling that one of my favorite zones would be ready. After a couple hours of skinning up a steep and wind hardened face, I peered into the steep North facing aspect. The spines were there and looked prime! An epic session ensued, lapping my favorite backyard spines, only 40 minutes from my house to the start of the climb. 2 + feet of low density snow coated the spines. At only a thousand feet high, these lines lend themselves to getting rowdy without too much exposure below. 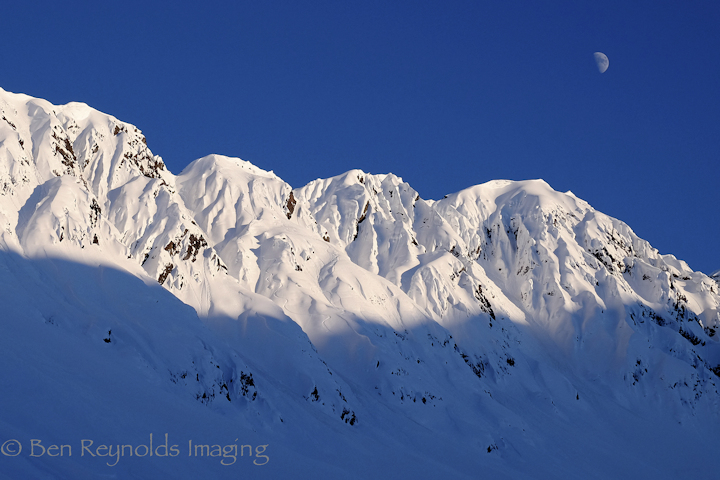 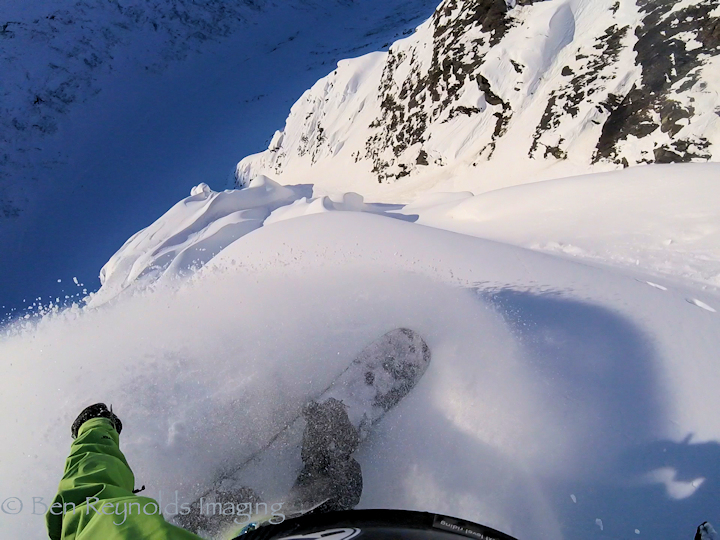 The next morning I made an early morning start to get to Turnagain Pass before light.
One zone that I especially enjoy getting on contains over a mile of steep spines and ramps, all South facing. This time out I was solo. Run one was as far back on the ridgeline as you can tour, before the ridge becomes too exposed and rocky to continue along. 2,000+ ft of blower snow on connecting ramps brought me to the valley floor. From here I could pick out my next line further along the ridge. Here, you have to climb directly up your line with Verts. This is my preferred way to access serious lines, as you can evaluate both your descent and the snow quality from on the line itself. 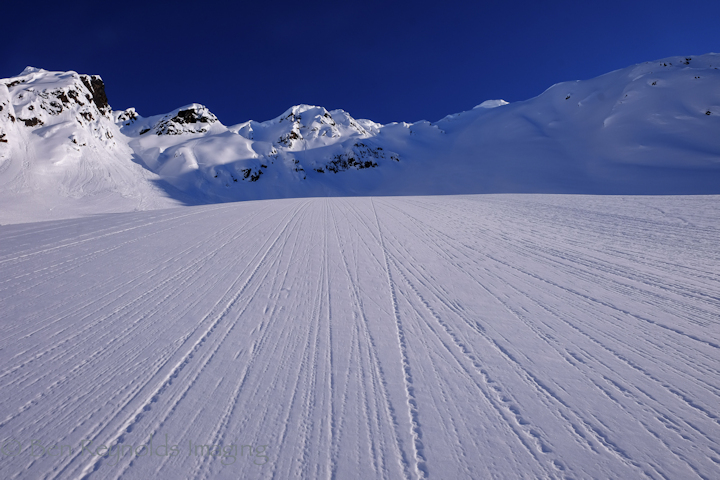 The line I chose was one that I had ridden earlier in the winter, solo as well, but it was during the short hours of December and I had run out of sunlight. This time I had direct sun for both the climb and the descent. It consisted of climbing a direct couloir to the ridge and then riding a series of spines where you have to transfer from one to another to reach the apron. I topped out onto the narrow ridge 2,000 ft above the valley floor. Feeling the intense focus of having climbed a very serious line in deep snow, I methodically readied myself for the exposed line. The line rolls over so steep, that you cannot see where you need to be until you are actually riding. I checked my gear one last time, then pointed my Milligram down onto the perfect face. One of the most satisfying lines I have ridden this year!

Saturday I was back at Turnagain to start the long approach through the trees to the zone from the day before. This time I had a ski touring partner, Jordan.

We accessed the same ridgeline as the previous day. This time with the knowledge that as it was the weekend, many more skiers and snowboarders would be on their way to find their own share of steep lines. We were the first to the top of the alpine ridge. The sun rose just as we summited, bathing the steep South face in perfect side light. For over half a mile we skinned the ridge, taking off our splitboard and skis several times as we scrambled over technical exposed sections. Mountain Goat fur clung to a rock as I down climbed a cliff. Run one was next to the first line from the previous day. Untracked ribs awaited us once again. 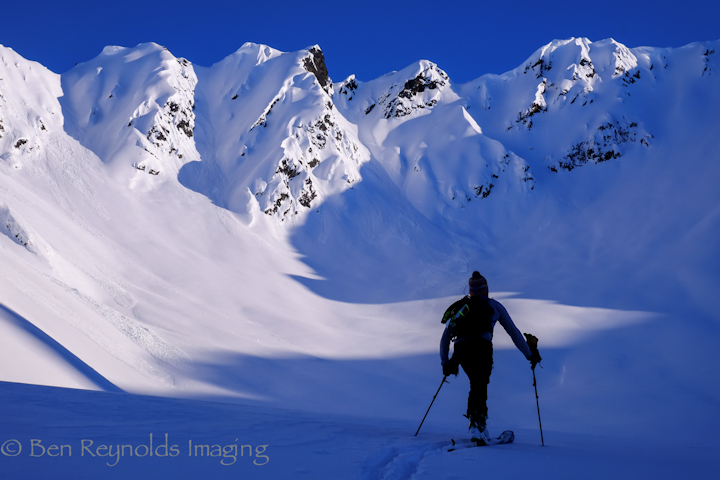 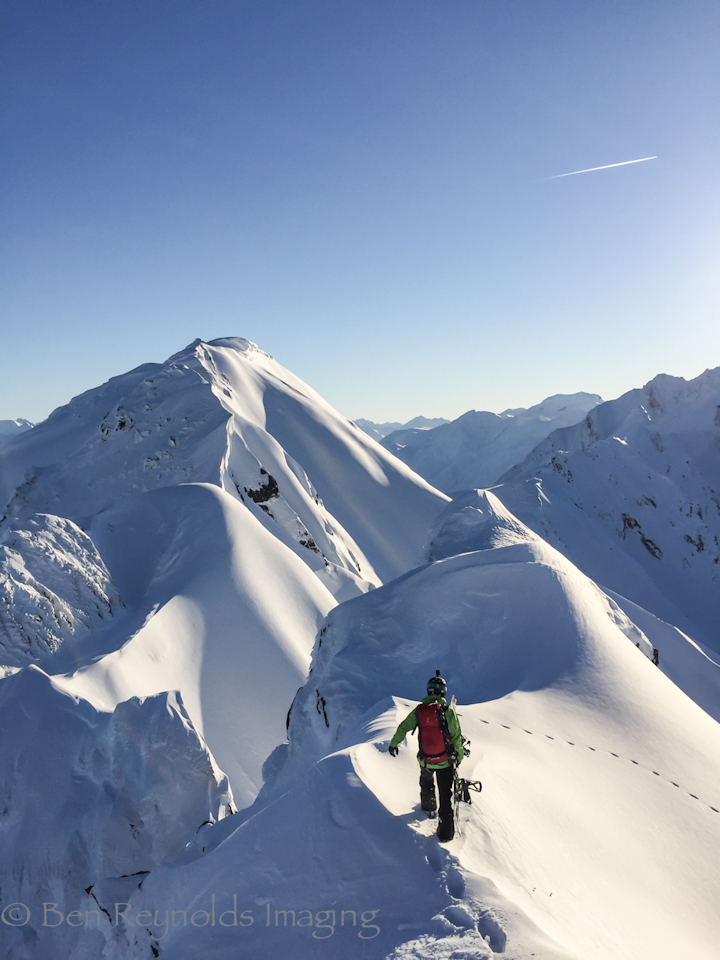 Having a strong partner can be a great asset in the backcountry. You can push your comfort zone a bit further as you know that you have the support of a friend that is motivated and has skill sets that can help achieve lofty goals. We set our minds on an unseen line far up the valley. Located in a dramatic cirque and surrounded by equally stunning lines… our line awaited. I had seen the line from the summit of Kickstep a month before. It was a face that held steep spines and an exposed ramp. The ramp had a small entrance, was fairly narrow and the fall line side had a 60m high cliff along its length. 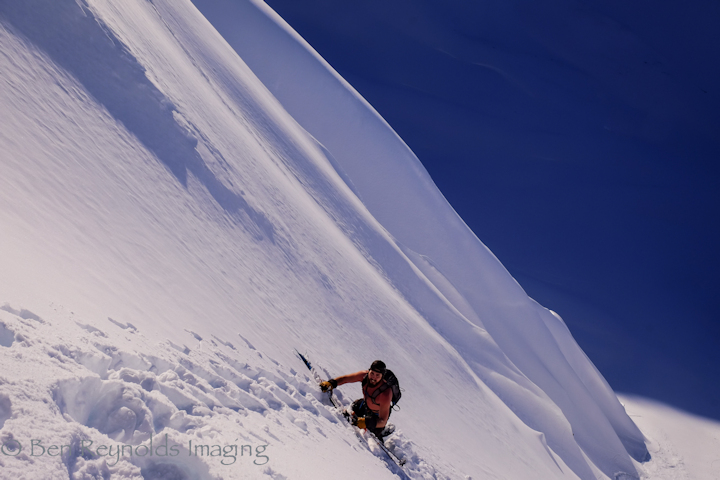 Turnagain pass was experiencing a common phenomenon called a temperature inversion. The valley floor temps were around -15 degrees C., while the cirque we were in was close to 5 degrees C. above zero. Ascending the couloir adjacent to our line with Verts on was hot work. The left side of the couloir was directly facing the sun, and so the mountain was starting to shed its snow onto us. Rivers of wet sluff started to pour down beside us. The higher we ascended however, the safer it became as less snow was available to come down. Topping-out of this line, a spectacular 360 degree view awaited. Some of the steepest and most serious lines in Turnagain could be viewed from our vantage point. Several other groups were visible, picking off their own trophy lines. 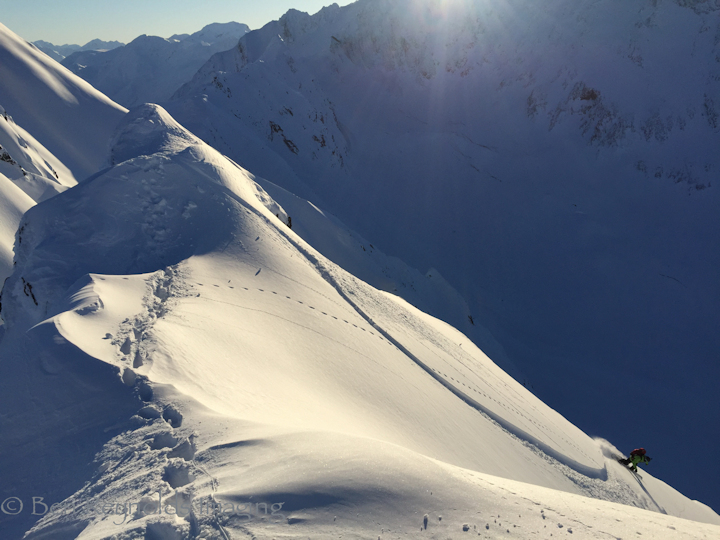 Our lines here did not disappoint! The exposed ramp held deep, dry snow. Sluff poured off the cliff on my left side as I made turns down the edge of it. Jordan skied a similar line, one of the steepest runs of his life. With the sun starting to set, we began the long run along the freezing valley floor. I had totaled 17,000 vertical feet (approximately 5200 vertical meters) over 3 days. 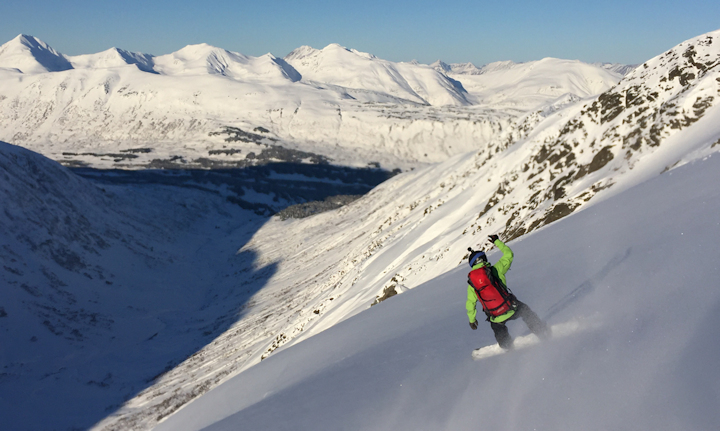