Deep in the Chugach Mountains, a peak stands isolated from every other mountain, rising to 7,188 ft. Prominent. Iconic. The North face of this peak holds a line that is revered among steep skiers. It is listed as one of the Big Five of Valdez and holds a spot among The Fifty Classic Ski Descents of North America. Pontoon Peak.

The first descent was made by heli ski guide Jerry Hance and Tsaina lodge owner Michael Cozad in the early 90's. However on the same day, pro skiers Eric Pehota and Trevor Petersen made the second descent, riding up on the pontoons of the helicopter as the upper Landing Zone is quite small.. though I imagine that this was done more for the photo opportunity rather than practicality.

Since that time it has become a classic, expert, ski descent. The peak lies far enough away from Valdez, that access accept by heli or ski plane was always going to be a challenge. Snowmachines however are continually becoming more capable. In April 2012, 2 skiers and a snowboarder were able to make the first ascent of the mountain, before skiing back down to their sleds, over a 3 day period.

The next year another group of 3 flew in on a ski plane and over the course of several days, climbed and made descents again. For the next 6 years, there is no public knowledge of anyone else climbing Pontoon.

March 2019. A small crew and I had been going on deep strike missions for over a week. Stability up high was great and the glaciers had firm snow which made for easy, efficient travel. Areas that were once relegated to multi day missions on sleds were becoming day trips. I had eyed Pontoon from multiple angles over the course of the week, never having an ambition of attempting such a committing and storied line. However on the last day of March, we put down lines on the flank of Pontoon after navigating a maze of crevasses on our sleds. Being able to look directly up the line on Pontoon proper had us envisioning ideas of grandeur. Greg Stafford had been on the glaciers that day in 2012 when the first group had made it out to Pontoon for the first ascent. Sickness had turned him around that day. However the illness of Pontoon on his soul persisted long after that spring day. He knew conditions were right, we had the right crew and the weather was holding. We left the peak in the dark that evening. Riding 30 miles back to Thompson Pass over 3 glaciers, we all had a feeling of excitement and nervousness for what lay ahead the next day. We had already committed in our minds.

We saddled up on our sleds early. The squeeky crunch of snow beneath our boots, the clinking of the ice screws on our harnesses, cold pistons moving up and down on the first pull and then the sound of two stroke motors lighting up were the only sounds that morning. All of the other crews in the parking lot atop Thompson Pass were sound asleep. Motor homes, travel trailers, Sprinter vans, enclosed sled trailers, pickup canopies, home built shelters, Arctic Oven's, Subaru's and other forms of shelter that are not easily described held skiers and snowboarders that had come to Valdez to ride lines at the limit of their ability. And to drink past their abilities. We knew that we had this line to ourselves.

While the daytime temps on the glaciers were rising above freezing in the hot Spring sun, night time temps would dip well below freezing. This causes the surface snow on the glaciers to turn rock hard. Our liquid cooled sleds rely on snow being thrown upwards by the paddles on the track to hit the underside of the tunnel, which houses the heat exchanger. Without soft snow the sleds will overheat quite quickly. Thus began the long ride to Pontoon as we leap frogged our way out, stopping to cool the sled and chopping ice chunks to pack around the tunnel to keep from burning down a motor. Several hours later, we arrived at the line.

We navigate through a steep crevasse field on the sleds to arrive at the base of the route. The sun is hot now and starting to come around far enough to illuminate the North facing line. Nearly 4,000 ft above us is the summit.

The first obstacle comes right away, at the bottom of the entrance couloir. A gaping bergschrund, facing upwards, cuts across the entire face. Known as a “catchers mitt”, this type of 'schrund catches anything that falls down the upper face and into the couloir. I carefully front point in my crampons up to the edge and peer in to a gaping hole. We are able to traverse far enough to the side to find a thin bridge and cross over. As we traverse back into the couloir, we are committed. The knowledge that we are continually exposed over a massive crack with no chance of skipping over the top of it if we are swept down, creates a seriousness that we all feel.

Topping out of the couloir onto a slightly lessening angled shoulder, we are able to regroup. One member of our team has had enough of the intense climb and decides to dig in and wait to meet up on the descent. After evaluating the very steep and very exposed upper face, we start up. Greg Stafford leads the way, followed by Emily and then myself. Greg kick steps upward onto the steeper face and promptly dissapears! A second bergshrund cut across the upper slopes and Greg had broken through. Our hearts stop for several excruciating seconds. Then his head pops up, “Hey guys, theres a schrund here!” Fortunately it was shallow enough that he was able to extricate himself.

We are now methodically kicking steps and sinking axes into the steep upper slope. This section starts to climb above the diagnal cliff band that makes Pontoon iconic. Even with ideal snow climbing conditions, axes and crampons, the hours of exposure while climbing is starting to get to me. It has been a long and intense week of steep lines. I'm starting to get tired, and when I do, I find that it is harder to maintain a focused mental state. But this is no time to relax or to let my nerves take over. I force myself to focus my attention on the task at hand. This helps and I keep climbing upward with a renewed energy.

The narrow, steep, summit ridge carried on longer than we all thought. The higher we climbed, the more airy we felt. Our right side dropped away in vertical cliffs. Our left fell away in a 50 degree slope, one that we had dreamed of for years. After 4 hour and 45 min., we topped out on Pontoon!

The fact of what we had just done was not lost on any of us. Greg, Emily and I all hugged, laughed and may have shed a tear in relief, excitement and overwhelming stoke!

The sun was shining directly on the north face, though lower in the sky than we anticipated hours before. We quickly switched over to ride and ski mode. The snow quality was great for climbing, however it was more firm than I would have liked to feel great dropping in off such a big line. Greg led the descent, confidently dropping in and making big turns way out on the face as he descended at the angle of the upper cliff band. Emily dropped second, electing to stay a bit closer to the ridge line for the upper descent. I also rode conservatively. Perhaps no other line I have ever been on has demanded the attention and respect as this. After several hundred feet, I found more edgable snow and was able to get into more of a flow. Through the entire descent, my Amplid Milligram splitboard held its edge, even when my form got a bit sloppy while making jump turns.

We aired over the upper bergshrund and met up with our other partner who was very cold by this time as he waited mid line for us. With the sun setting now, we dropped onto the lower mountain, choosing not to descend the lower couloir with the gaping bergschrund at the bottom. Instead, a tongue of snow over a thousand feet high cut between towering blue ice. We rode down in a foot of blower snow, finally opening up our speed! Lower still, a crevasse field made for high speed route finding through gaping holes and cracks.

Finally with huge grins and frozen faces, we rode right to our sleds which we had staged below. The fading alpenglow was quickly moving up Pontoon, leaving a cold blue hue in its place. We had safely accomplished our ambitious goal. We tugged on the pull cords of our sleds and the cold pistons fired up again. It was going to be a multi hour journey in the dark, navigating over 3 glaciers, 3 2,000 foot climbs and more than a few sections of technical sledding. We had just day tripped Pontoon Peak. 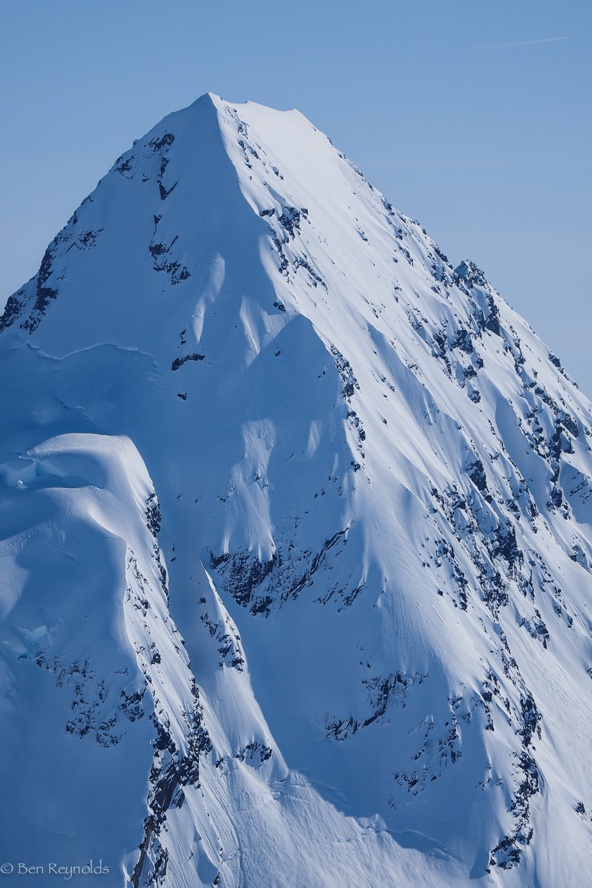 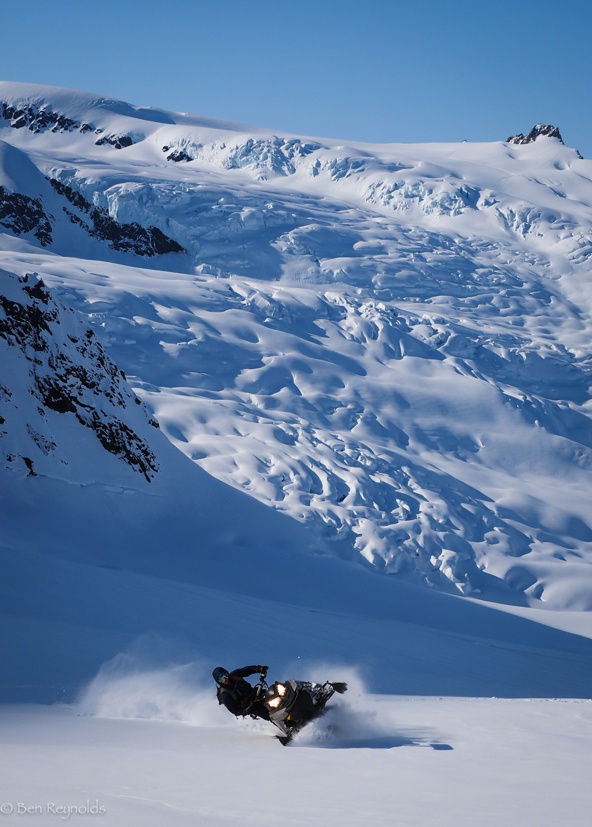 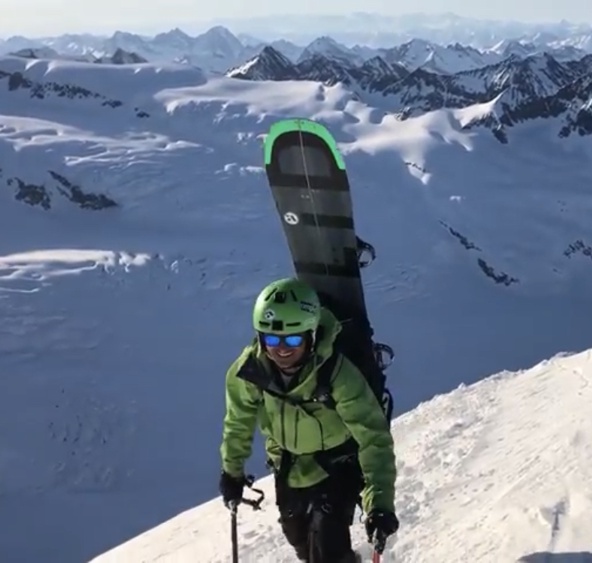