Kevin's buddies at 22 Productions aka the judges have been hard at work pondering over the many edit submissions for the Summer Rail Challenge, but we're now ready to reveal the winners. Before we do though, here's a quick word from Kevin, the man who pulled the whole contest together:

"I'm really stoked on how many sick entries you guys sent in to this contest, the quality of all the edits was really high and I was super stoked to see all the creative rail setups and tricks you guys did. I had a great time watching all the edits with my friends who helped to judge the contest! We are for sure stoked to go skiing now!

A big thanks to everybody who participated in the contest. Thanks to Newschoolers who helped me to promote the contest; to my friends who helped with the judging, and to my sponsors (Amplid, Saga Outerwear and Tall T Productions) and mSnow for supporting the contest with prizes! I'm really stoked on how the contest turned out, and I hope everybody enjoyed watching all the edits as much as I did! Let's make this contest even bigger next summer! I already have tons of new ideas for the next edition so I'm sure it'll be even better, stay tuned until next year! Kevin"

So without further adieu here are the winners of the Summer Rail Challenge 2015 by Kevin Salonius accompanied by Kevin's comments:


"Chris has got really good style! I really like all the tricks and the creative setups he used. Overall his edit is really sick, my friends that helped to judge the contest and I agreed on this as the winning edit of the Summer Rail Challenge."


"Markku's has a good mix of creative setup and sick tricks, overall his edit is really impressive and well made!"


"Kyle's edit is really nice, he has some really cool rail combos and a big bag of tricks."

From Amplid the winners will receive: 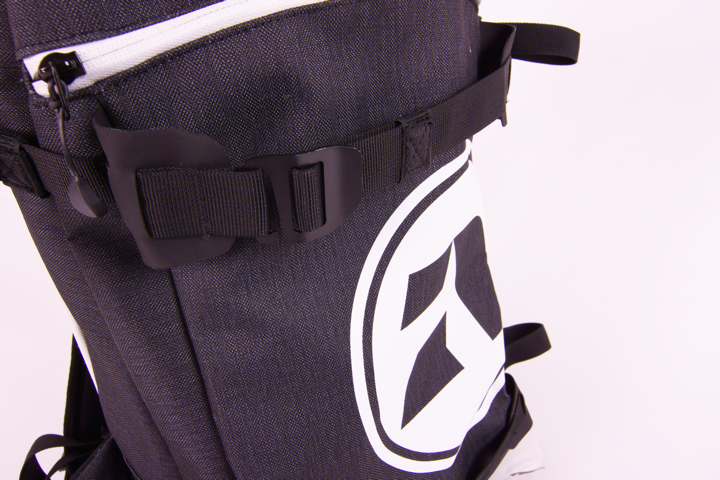 In case you don't remember what the winners prizes were from Saga, Tall-T-Productions and of course mSnow, here's a quick recap... it's like Christmas has come early! Saga is kitting out Chris with an Outerwear set from the latest collection and hooking Markku and Kyle with gift cards. Tall-T-Productions is swagging-out the top three places with some generous soft goods packages. And mSnow, a late addition to the events sponsors list, has gone absolutely bananas, giving the top three winners an opportunity to pimp-up their set-ups with a box of artificial snow tiles and kitting-out the top ten riders with summer wax and stickers. 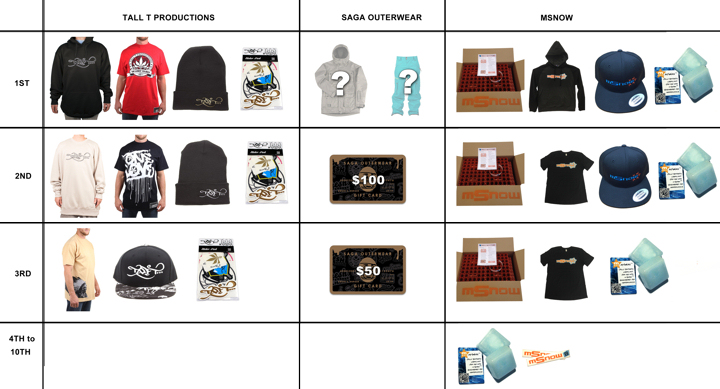 In addition to the regular prizes, since the video entries were so varied in terms of set-ups, Kevin decided to hit-up his sponsors one last time to gather a selection of bonus prizes for skiers who brought something fresh to the contest.

Stephen Draper - Medium box of mSnow
Stephen had a cool set-up and really showed some impressive skiing, but we thought he'd benefit from some new turf and mSnow agreed.

John Degelau - Amplid ski sack
John had a lot of really cool rail combos and he also hit a rail so long that he was drawn into a wormhole... that's got to earn him a bonus prize!

Northswingers - Saga ski socks, Amplid facemask, Saga beanie
These kids had a really interesting set-up and some wild tricks. Props for the flip into the water! They had good teamwork and overall it was a really exciting edit to watch.

Isaac Wright - Amplid beanie
Isaac's got a nice bag of tricks and his switch-ups are on lock!

Jerome & Paul Vieuxtemps - Saga beanie & Amplid beanie
Jerome has also earned himself the "Dad of the Decade" title, but Dad's don't hit rails without encouragement from their offspring, so we're hooking-up Jerome and Paul with a beanie each.

Kevin will contact each of the prize winners individually to confirm shipping details. Please be aware that many 15/16 products are still in production (Amplid's included) so there may be a several week wait before prizes can be shipped.

So that's the SUMMER RAIL CHALLENGE by Kevin Salonius for 2015, we hope to see you back here next summer for the second installment.