Alex Proyer and his friend Christopher Graf decided to ascend Ahornspitze (2973 m), Mayrhofen, in the middle of March. The weather forecast was ideal and the avalanche danger was minimal, perfect for this splitboard tour. The biggest benefit of scaling the Ahornspitze is that the starting point of the tour is at the top station of the Ahornbahn, which conveniently scrubs almost 2000m of vertical off the ascent. The day started with a short climb of the Filzenkogel (2227 m). Dropping off the back of this small peak placed Alex and Christopher in the main bowl from which they could access the summit of the Ahornspitze. 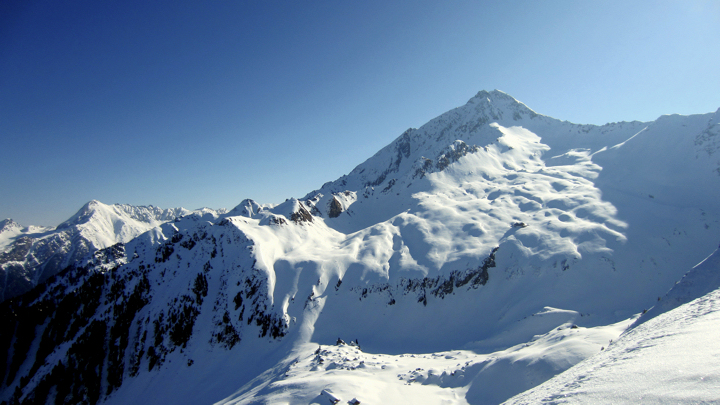 A view of the North West face of the Ahornspitz from the start of the climb. 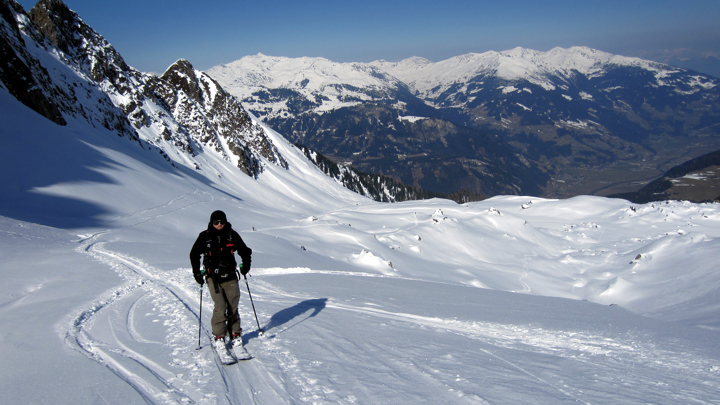 The majority of the climb up the Ahornspitz is steady cruising, perfect for long strides with the weightless Milligram

The majority of the ascent to the summit of the Ahornspitz isn't too technical with a constant incline, but the last 250 vertical meters to the peak are rocky, wind-blown and steep. Alex and Christopher had to dismount for this section and climb with their splitboards on their backpacks. After a total of 1300 vertical meters they finally reached the summit of Ahornspitze. 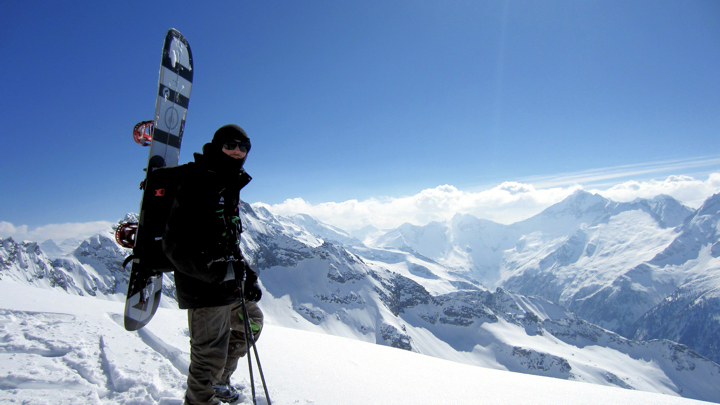 The last 250 vertical meters of the climb are steep and rocky which meant it was time to hitch the boards to their packs.

The views from the summit of the Ahornspitze are incredible. To the north the Zillertal Valley blends with the Inntal and the Northern Alps fade away into the distance. Looking to the east the jagged mountains of the Hohe Tauern jet upwards steeply, offering untold numbers of splitboarding opportunities. To the south, Hintertux soars into the sky, marking the point at which Austria meets Italy. For experienced riders with climbing equipment, the pyramid-like peak of the Ahornspitze offers many lines, in particular a steep couloir with almost 800m of vertical. In this low-tide season, Alex and Christopher had to make the decision to ride down the face they'd climbed... maybe next year they'll poach the couloir. 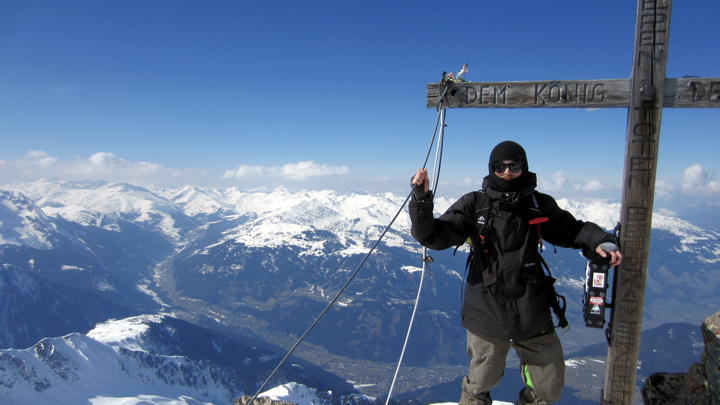 Alex enjoys the view of the Zillertal and it's surrounding mountains from the summit of the Ahornspitze. 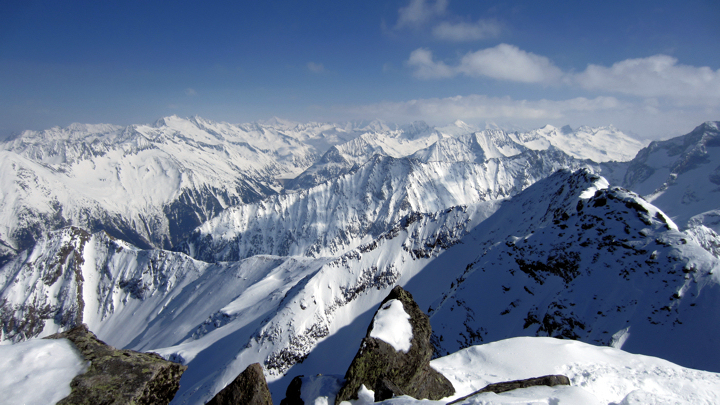 Looking east along the Gerlospass the mountains of the Hohe Tauern are like jagged teeth. 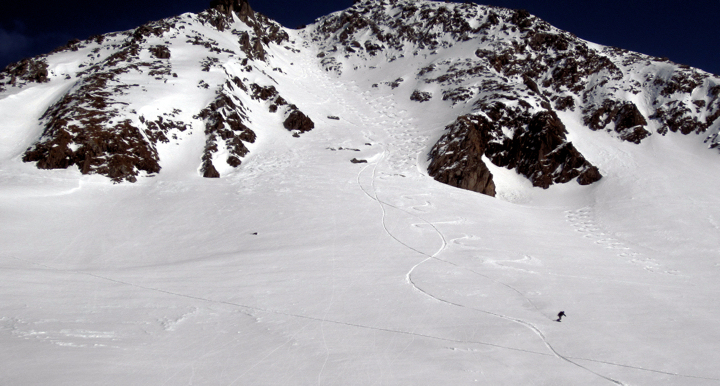 There are those that like to turn and those that don't. Alex counts himself in the second group. Here he is drawing dollar signs down the top section of the descent.

There were only four fresh ski tracks in the colouir before they droped in. The total ski run from the summit to Zillergrund at the end of their run was 2300 vertical meters. A run which included everything a freerider could ask for including cliff jumps, nose butters and heaps of fun! 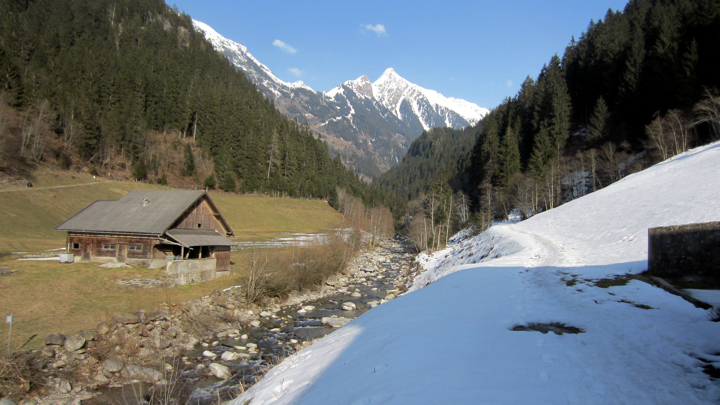 Another benefit of descending north facing sloped in the middle of March is that you can reach the valley without walking! 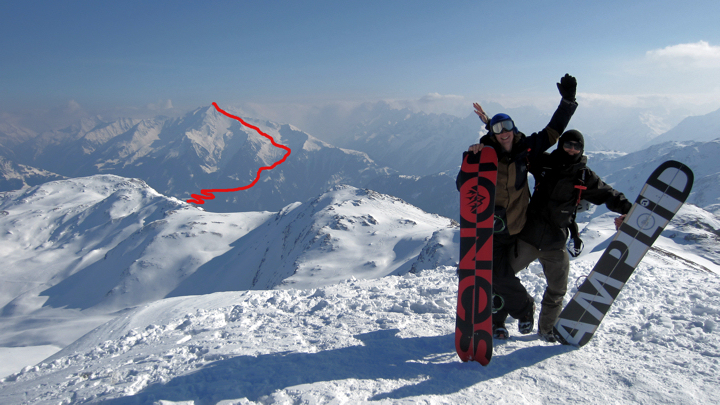 Alex and Christopher view their handywork from Zillertal Arena resort the following day.