Every Friday we ask a member of the amplid Cartel team to tell us about five of their favorites. From five must have tricks you need in your repertoire to the five albums that are rocking their headphones every time they destroy the park. Weekly we’re bringing you closer to the amplid Cartel. 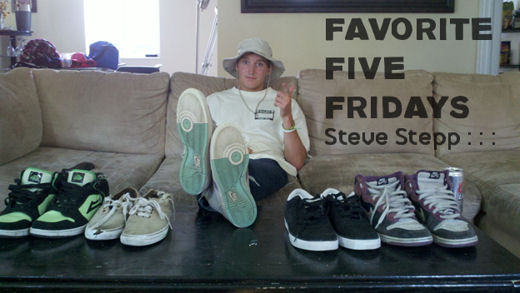 This week SLC resident, Park City local and balaclava wearing style master Steve Stepp runs through five skiers that are taking skiing to the next level.

Tom Wallisch – It’s weird putting one of my best friends on my “favorite skiers” list, but whatever. He’s the steeziest and most tech skier in the game… and he’s a great guy. I just wish he would go back to 2007 and wear the gutter-ass clothes that he used to.

Cal Runnerstrum - Not many people have heard of this guy, and fewer can emulate his style. This kid is so smooth he makes skiing look effortless. Check out his edits on Youtube.

Henrik Harlaut - Henrik is one of the most dedicated and hardworking skiers I’ve ever met. He loves skiing and wants to push our sport it in a way that encompasses style and technicality, rather than running the race to the biggest spin or most flips. This kid is mad real!

John Ware - I’ve dubbed John Ware the “BSA”, Best Skier Alive… because it’s true. His style is unmatched, his jumps and rail game far exceed any skier that has ever lived.