One of the most comprehensive snowboard tests on the planet, the Snow Surf Magazine snowboard test puts more than 250 boards through their paces each winter. Conducted by ex-pro snowboarder Franky Moissonnier and his hand-picked team, you can be confident in these reviews are as genuine as it gets. Amplid has translated these texts from the original reviews which appear on snowsurf.com in French. The images are taken from issue 148 of Snowsurf which is available from newsagents and good snowboard shops throughout France.

UNW8 | 2016 Top of the Pop Award
Positives: Grip, speed, lightness, pop
Negatives: Quite demanding
The UNW8 is designed for performance and a unique feel. It features "visible" technologies typical of the German brand, such as transparencies that unveil carbon and the core, in the nose and tail. On the pistes you immediately feel unparalleled grip, which means you can go fast, very fast. Its lightness and its reactivity make it an efficient and manageable board, to rider everything with power. It is certainly a little demanding, but its grip in turns is flawless. We go from carve to carve, playing with its nervousness, and it makes us want to attack and go faster. Added to this nervousness is a magical pop, for launching airs off whoops and other hits off side of the piste. Its powerful flex allows it to go straight into a field of bumps without flinching, it’s a pleasure in rugged terrain. The board for those who seek versatility to ride everywhere, on all types of terrain at high speed.

Paradigma | 2016 Banger Board Award
Positives: Fun, forgiving, performance
Negatives: Doesn’t wash the dishes
This year, the famous Paradigma received a good update. Having long been a pure directional board with a strong freeride connotation, it was logical, considering Amplid’s range, that it is found more on the side of the backcountry. Now it gets a twin shape, but keeps a larger nose kick than its tail kick for a good dose of versatility. And even if we loved the old version, this update made us fall completely in love. Not too concrete under the feet, but stiff enough to be super-efficient in difficult terrain, it does not break the legs even during the longest days. Its Direction Cruise Camber gives her more pop than the old Hybrid-V version, and it is very playful in tips to have fun buttering and pressing on the flat or in the powder. Its high level of carving grip combined with its pop, makes it possible to put precise in impulse on the kickers, but it is especially on landings that it feels solid and gives confidence that one can really count on it. A 100% modern board with camber, but enough nose rocker to make it versatile and extremely effective everywhere. 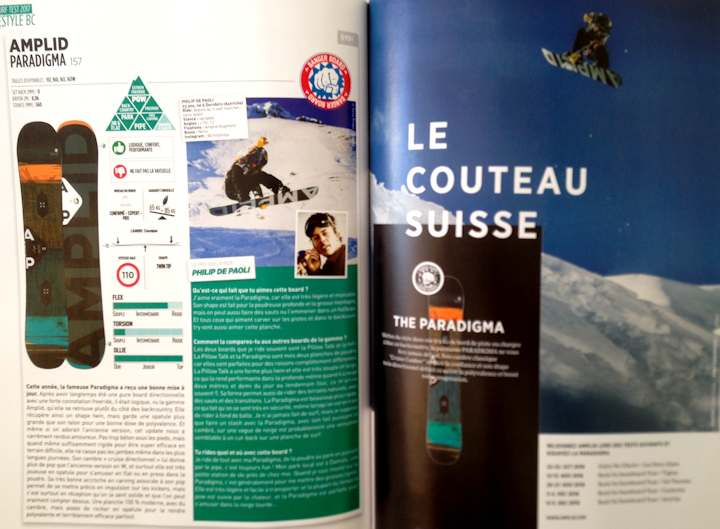 LoveLife | 2016 Top of the Pop Award
Positives: Easy pop, recovery, stability and grip
Negatives: Torsionally stiff
Entirely reviewed this year as much in shape as in construction, this new edition of the Lovelife allows to be fluid while sending strong. It has a geometry that makes it easy to handle and swivel despite its somewhat stiff twist, and its combination of a soft flex with a pop that detonates will delight the fans of the park and a snowy ride uninhibited. It is very responsive, great for those who like dynamic rider, play on extensions / flexions to feel the raise in the corners, a good board in all mountain mode. But it is also particularly pleasant in park, with a well-tempered character and what to enjoy on the catches of momentum and to launch rotations easy. It hangs well thanks to its classic camber and remains stable, for an excellent combination of maneuverability and reactivity. Accessible for all levels, what more can you ask for, a very good all-round board, freestyle trend, for all girls who love life ...

Milligram
One of the lightest boards on the market, the milligram returns this year almost identical to the previous year, but with new “Tanga” construction for increased durability of the topsheet in the tips. Riding, we found a powerful board, which shares the same shape as the Creamer; directional, a small setback and a long nose. Inevitably, it is very pleasant to climb with so little weight under the feet, and we didn’t lose anything downhill, in fact we won! Because the Milligram is solid and reactive without being too rigid, it’s powerful, but progressive. So of course, it’s not a board to put in the hands of every snowboard, because it is quite technical and even tiring in difficult snow conditions. However, with a physical riding technique (and perhaps a little weight) it is deformed rather easily, with even the occasional unexpected nosepress and ollie. More manageable than it looks, this beautiful black board really makes it possible to ride all the mountain, under all conditions. It flies very naturally in powder and on hard snow it controls with confidence. A board for expert splitboarders to go far on, without sacrificing their board.

Creamer
Positives: Grip, buoyancy
Negatives: Not a board for freestyle
A new season for the Creamer, which is identical to the previous year’s board. Like all boards by Peter Bauer, the emblematic Amplid boss, it has a solid level of materials and tech, a board to go far. Shaped perfectly for freeriding it has setback combined with a classic camber and a beautiful nose, the specialty of the German shaper. All this gives a precise feeling on snow, with great versatility, for attacking slopes with fresh snow, but also in the forest where it’s nicely manoeuvrable, or in any snow, because this board destroys terrain and goes everywhere quickly, without effort.

GoGo
Positives: Agile, playful, catch free
Negatives: Lacking pop, exclusively for jibbing
Here is the board with which to make the longest nose / tail press of your life! This Amplid oriented jib is a real toy, easy to handle, perfect also for flat on track, with flexible flex and torsion allied to its camber V, enough to pass in mode "tops". Its hook is rather correct for a camber of this style, with the flat that it rides well on a relaxed rhythm, not of high speeds to the program. The idea is rather to feast with rotations, butters or other freestyle maneuvers galore, on a comfortable and easy board, within reach of all the riders, up to the most technical.

Stereo
Positives: Playful, easy, forgiving
Negatives: Lack of stiffness for performance
This year Amplid has a new version of its Stereo. Not too hard under the feet, it doesn’t break the legs, but it remains stiff enough to be effective and to go everywhere. This is not the most performance-orientated board in this category, but rather a very versatile, super freestyle-focused board, which is on the playful side… easy and forgiving. It has a good grip when carving and at the same time is ultra-tolerant. And although it’s not a freeride board, it’s a nice powder board option for borderline backcountry riding. A buttery toy, perfect for the shredders that like to ride the sides of the pistes and the park, but avoids the big jumps and rides with their weight evenly balanced between their two feet.