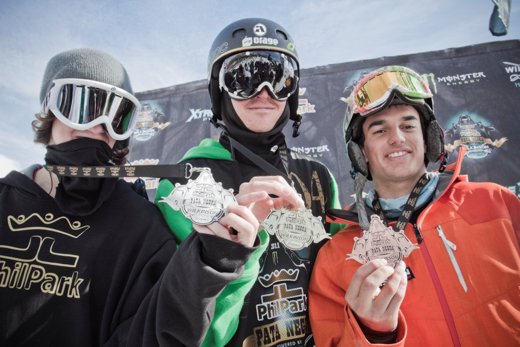 After a forecasted snowstorm to be rolling in, the organizer moved the finals from originally Saturday to be held on Friday – which was a good decision, since the PHILPARK INVITATIONAL is one of the most important freeski contests in the Pyrenees. Another change has been defined during the rider’s meeting -  the kind of judging applied in the finals was quite different in comparison to what all competetitors were used to: All non-qualified riders could judge their shred buddies in their final runs. And those final runs were indeed final runs, showing final trickery as if there is no tomorrow: Everything up to switch double cork 1260 were presented on that white stage.

Andreas Bacher (ITA) came in 3rd place after throwing severe run with a backside 450 out, a switch 1260 mute, an unnatural cork 720 farmute and a last but not least misty 450 out.

Amplid team member Mcrae Williams (USA) stepped on top of the podium with a misty out on the canon box, a switch double cork 900 over the kicker followed by a unnutural rodeo 900 onto the step up and a switch in a 620 out at the pole jump.