Stormy Showdown in the Snowpark Lenzerheide – AMPLID Rider Aaron Berger Dominates the Park Crowd
It all looked perfect at the beginning: clear skies, brilliant sunshine … hadn’t there been the wicked wind. There wasn’t much of a choice and so the decision was made to do a jibcontest in the lower park area. Despite the suboptimal conditions, all the elements in the Easy Park were shredded without mercy. A perfectly shaped setup, including an 18m monster kicker were waiting on Saturday morning in the Snowpark Lenzerheide to be conquered by the shred-hungry boarders. However, sometimes things take a different course: stormy gusts scotched the plans of the organisation team. Safety goes first and therefore it was decided to hold the contest in the lower park area. Massive jib-action instead of windy airs should become the alternative program. 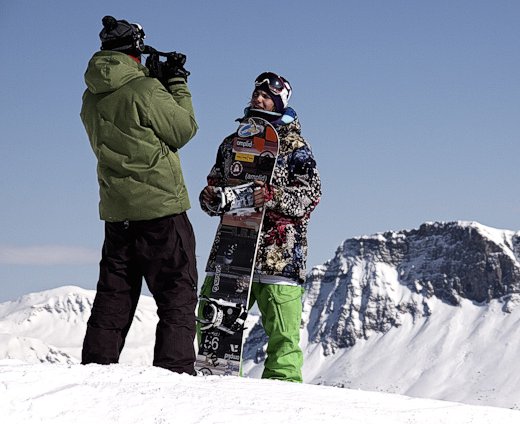 More than 40 motivated snowboarders gathered soon after in the jib-park, ready to give their best for the CHF 3000.- prize money. The contest mode was easy: each rider had two runs with three options: jib-line 1 (rainbow box, jib-can, down-box, jib rockets, down-rail), jib line 2 (2 XL butter-boxes, elephant box, wave box) or 3 kickers in a row. To be judged was the overall impression, the performance in total so to speak. Apart from chilled out beats from the Kapelle NeOn, the men, rookies and girls showed jib-action at its best: there was sliding, donking and jumping like there was no tomorrow. Only the wind couldn’t be impressed by the good mood and brought some more clouds in its tow. Eventually, the conditions were too fierce for a finale. Out of hand, the winners of the qualifications were also declared the winners of the Freestyle Madness 2011 – Snowboard.

In the category Snowboard Men, it was AMPLID rider and rail machine Aaron Berger (CH) winning ahead of Kuppelwieser Luca (CH) and Zemp Robert (CH). “Yeah, that was a really good day. It’s a pity that the contest couldn’t be held in the big park but it was also super fun to play around in the small park!”, said Aaron after his victory and was stoked about the sweet CHF 1.000,- prize money. But also the rookies nailed it. First place and winner of CHF 2.000,- was Paosut Marco (CH). On second place came Popp Lars (CH), followed by Stecher Nicola (CH). With an impressive backflip on the the last kicker, Könz Elena (CH) secured her victory and CHF 200,- at the girls’ with Lang Cosima (GER) following her on second, and Schmied Fabianna (CH) on the third place.

Read the full story and check out more photos at Q-PARKS !